The light at the end of the tunnel

Hi - I'm back! Been a while eh. Sorry about that, but work at the wood has not stopped, nor have we forgotten about you (and thanks to you-know-who-you-are for the much-needed "nudges" to get back to updating you all) - so sorry it's been left so long.
It looks like we may finally be looking at an end to the lockdown later this spring which is fantastic news. The last year has been a challenge indeed. For all sorts of reasons; I was unable to return to work in Zambia; the tourist industry has been decimated by this pandemic and recovery could take years. For some, it was simply too much and sadly many lodges and camps have not survived, and many of my friends across Africa have lost their jobs. Our lodge in the Kafue National Park is still open, mainly hosting Zambian residents at present, but there is hope for the 2021 season when internationals are permitted to travel again. We are keeping everything crossed for a positive outcome.
The woodland, however, has been doing extremely well and has been invaluable; serving as respite, sanity, and solitude for many during the last year. A place where we can get out of the house, work with nature, exercise, get fresh air and simply forget about the chaos going on around us. A welcome escape. 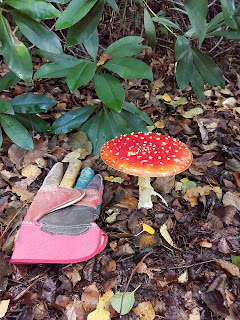 As usual, there has been an incredible amount of rhodie-control (bored now) going on, but we are definitely well on our way to eradicating it from all but the borders of the wood. It's taken us nearly 7 years, and hundreds of hours of effort to do it by hand, but the effects are really starting to show.
During the summer of last year the meadow under the wayleave was finally clear of bracken too and full of wildflowers, grasses, butterflies and insects. It was positively humming and I'm so excited to see how it will come up this year and whether or not we can add any new butterflies to the 17 or so species we have already recorded at Rais. 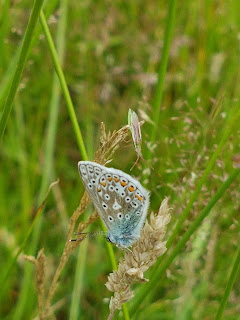 The dam has held up extremely well over the winter and with these endless rains, the feeder streams have really settled into their path and are even forming smaller ponds of their own at varying levels which I love. There is still a long way to go to repair the damage done by the rhodies, but there is definitely light at the end of the tunnel now - and light on the woodland floor too - in some places for the first time in decades. I can't wait to see what dormant seeds we have unearthed. I am also hoping that the gorse bushes will be able to thicken up and propagate now that they are not choked in evergreen aliens stealing all their light, space and nutrients.
Thanks to our camera traps, we believe we have badgers breeding in the sett again this year... the cubs are typically born this month but don't surface until April so with any luck Mrs. Brock is snuggled up underground with a few suckling cubs right now. We also hope to find out about last year's litter - soon enough the camera traps will be out again and I will spend long evenings once again scrutinizing hundreds of dark and blurring 10-second video clips to see if I can mark out individuals in any way..... or even just tell the males from the females.
The camera traps have also captured some great footage of the many visitors that came to gorge on the carcass of a deer that sadly met her end around the new year, in the northwest section of the wood. Here are a couple showing a fox by night and a buzzard by day. We were astounded at the distance the carcass moved over the course of the weeks that we watched it, and the sounds of the fox tucking in remind me of similar sounds made by lions tucking into a recent kill on the savannah... albeit with a little less growling! 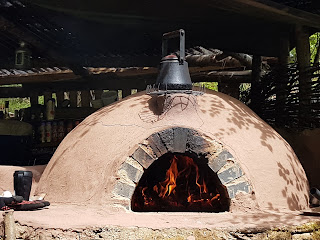 After a champagne-fuelled ladies day at the Lingfield Park Races, we arrived at Rais mid morning on Saturday to get Cassius fired up for pizzas - He takes a good 4 hours to get up to temperature with gentle log feeding and slowly pushing back the embers to get a good base warmth. A much smaller oven would be quicker, but then we would not be able to use him for roast dinners at Christmas of course.
Lots of badger activity at the sett on the northern boundary line - I set up camera traps and explored a little of their path network to see where they are more likely foraging, but it seems they head out in all directions, so I will need to correct the time and date settings on the cameras and re-position them with fresh batteries if I am to work out their routine.
The temperature varied quite a bit depending on the winds, but when all was calm and the sun was out it was nice and toastie in our sheltered corner near the Yardarm. Another weekend of constantly taking jumpers on and off and dashing under cover every ten minutes as yet another rain shower passed over us.

Cassius' new skin of fresh clay cracked a little under the heat, but held sufficiently to cook in all weekend.... pizzas, jacket potatoes, garlic bread and kettle after kettle providing round after round of teas and coffees. Everything else was cooked on the fire - including Sunday nights venison chilli which wasn't quite so "chilli". 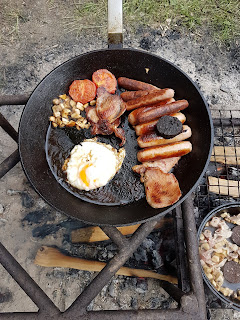 The sheer number and diversity of wildflowers was a welcome shock for me after not seeing the wood for most of last year... So many bluebells, primroses and garlic mustard (which I tried in an omelette Monday morning) as well as swathes of watermint (was a lovely brew too) and lady's smock. Yellow archangels cover the wet woodland floor around the Alder trees and foxglove leaves carpet the cleared areas of the wayleave - I'm gutted I won't be around to see them in flower this year either as I will be back in Africa working, but hopefully the gang will keep me fed with photos and updates as the weeks pass.
I took a couple of exploratory walks over the weekend and sat quietly with the binoculars at various spots; I was convinced I saw a black cap (my first at Rais) but cannot be sure as was a fleeting glimpse. Another reason to learn the British bird calls as soon as I return. Seems such a waste that I can identify over 200 southern african birds by their call alone, but only a dozen or so on my own turf. The shame! 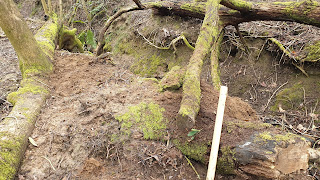 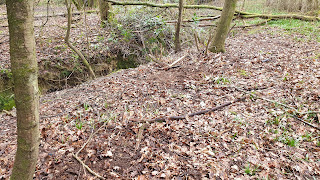 Started off at the top of the wood clearing the last stumps by the stream then worked my way across the hillside clearing the remaining stumps, there's only a few left to do in the section between the streams now.
After an early lunch I raked out the fire ashes from last week and put some new stakes in to hold up the Yardarm work surface

Then finished off by trimming back the branches from the other week into withies but it was quite cold and damp so called it day around 2.30

No sign of any squirrels this week again or of any new activity in either of the newly dug burrows. Need to remember to suggest to Jo that we could probably make a small pond easily by damming the steam a bit, near to the Hive 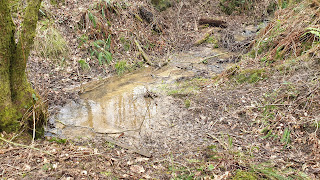 It was the last day at Rais before Joanne's return, so Helen and I headed up to burn the piles or brash that have accumulated in the last few weeks, and generally tidy up a bit!

The fire started well, thanks to some dry kindling and some patience, and we soon had a good base going and started to work through the rohdie. 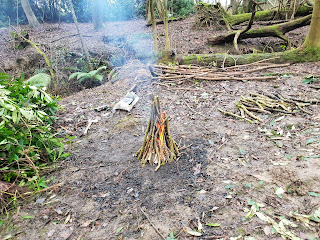 Part of the fallen tree that has been exposed by the rohdie clearance was much more dead than it had appeared and in the last two days it had fallen to the ground so I tided that and it made good extra fuel for the fire. 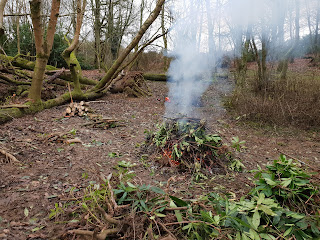 While the fire was going Helen cleared a bit more rohdie that was straggling across the bank, making quite a difference visually, and I dug up a few stumps. I found yet another burrow that is obviously in
use. 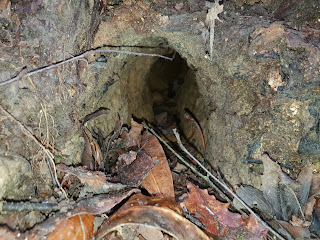 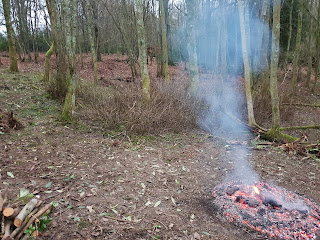 All the brash, and a fair few roots and bigger branches were burned by the time we called it day at around 4

Friday dawned cloudy but dry and noticeably warmer than yesterday. Today was a big day as Flee had finally managed to get hold of the mini digger so we could sort out the parking area.

Caution. It all looks a bit raw right now but don't worry, it will soon blend in.

I arrived about half nine with the rest of the ballast liberated from my parents lane repairs to find Flee with the digger unloaded and already hard at work. Over the course of the morning we levelled the area where I generally park by taking the top off the rise there, and then tidied up the very dead Elder tree and levelled the area along the edge of the roadway, down to where you park, to get rid of the dip that was there. 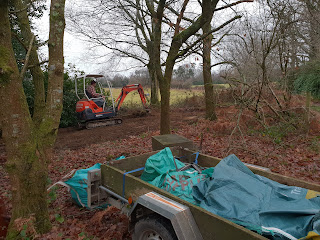 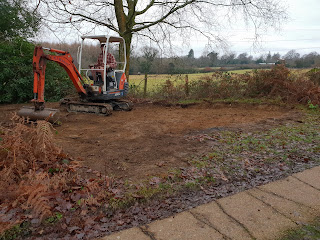 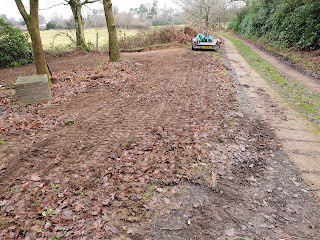 Once that was done we laid the slabs Flee has rescued from the our side passage when he did our patio and then used the ballast to make another well packed space next to that. The rest of it will just stay as earth for now, but it's much more level if we do need to park some cars on there. My dad will probably be digging up his quite large tarmac drive at some point this year so more scalpings might come available then if we want them. 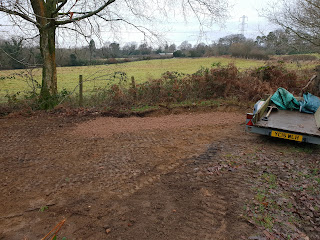 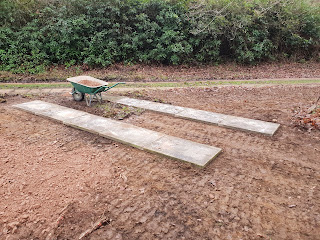 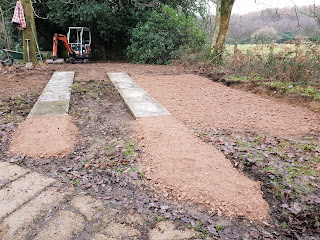 I think we were both really pleased with the result. It's a shame Flee could not get the digger until now so it will have no time to settle in before you see it but it won't take long until you won't be able to tell what was done I'm sure.

We were all done by lunchtime so after lunch Flee resisted the temptation to get to work on the dam with the digger! and instead went and carried on working in the wayleave by the dam to clear the brambles. I didn't get a photo yet but he said he found the boundary and the border of brash you had put along there and he had been building that back up.

As I stared work I noticed activity at the feeders over by the Hive. For the last few weeks, in fact since I first tried my new camera up there, I have not seen any birds at all at the feeders while I have been there. The food does go, eventually, but they are much shyer than down by the yardarm so it was great to watch from 100 yards or so away and see a constant stream of birds to and from the feeders including the woodpecker who spent a good three minutes on the suet feeder (no wonder the wood is going as well as the suet!)
I spent a couple of hours chopping and digging stumps, I think you're going to see a big difference from May, and called it a day half an hour or so after Flee at about half three.